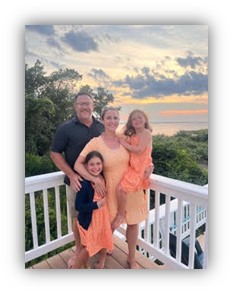 This past summer, Dr. Scott Bowdridge, Associate Professor of Food Animal Production, West Virginia University, opened our minds to his exciting research identifying immune mechanisms in sheep to eliminate parasitic infections. At the 2022 Eastern Alliance for Production Katahdins (EAPK) symposium he discussed his data that links low FEC EBVs (Fecal Egg Count Estimated Breeding Values) with an overall increase in disease resistance. Dr. Bowdridge has diverse experiences working as a sheep producer, geneticist and now as an immunologist. Through the years, he has developed many relationships with other scientists in the field. Together their groundbreaking research is advancing the sheep industry.

The Bowdridge family raised sheep in southern California. As a child, Scott showed Rambouillets and Oxfords through his local 4H. He mastered shearing sheep, which he used to earn money throughout college. When Scott graduated from Chico State in northern CA, he knew that he liked to teach others. For several years he taught agriculture at the high school level.

In 2000, Scott sought new adventures on the east coast. He moved to Maine to manage sheep for a nonprofit farm, which specialized in rare breeds of livestock. At that point, Katahdins were a rarity and mostly unknown in the sheep industry. He attended a local event for the Katahdin upgrading program. At this time, early breeders like Tom Settlemire and Charles Parker were trying in improve the Katahdins by breeding in more genetics for meaty carcasses. Relationships were forged at that meeting, which would change Scott’s life and tie him to this emerging Katahdin breed.

Scott earned his Master’s in Animal Genetics from University of Maine. He studied the diﬀerences in immune responses between Suﬀolks and Katahdins. In 2003, he even lectured at the first national KHSI Expo in Maine about his work in genetics. Yet he wanted to continue his research in sheep genetics with Dr. Dave Notter at Virginia Tech. He knew that southern VA was the center of progressive Katahdin genetics and he wanted to learn and contribute there. During Scott’s doctoral work, he slowly moved from genetics to immunology, where his passion still lies today. In 2009, he earned his PhD through his work comparing immunological mechanisms in sheep. He studied diﬀerent parasite resistant Katahdin ewes and asked questions like, “Why does it work this way?”

Scott’s path took an unexpected turn in his postdoctoral work. He wanted to delve deeper into parasite immunology, but there were more opportunities in human medicine than agriculture. Dr. Notter challenged Scott to “get trained and then you owe us.” In this way, Bowdridge could learn more in the medical field with parasites and then bring his knowledge back to the agricultural community.

Scott did just that. He studied the immune response of mice to parasites at the University of Medicine and Dentistry of NJ. As they moved throughout the east coast, sheep shearing kept the bills paid for Scott and his wife, Lizzie. They both continued their professional studies and postdoctoral work.

West Virginia University has always been strong in sheep research. When Dr. Bowdridge began there in 2011, the job description was wide open. At this point, he defines his position in research as a parasite immunologist. As well, Lizzie is a professor of reproductive physiology and toxicology at WVU. They have two young daughters together. Their winding path has prepared them well for their current positions.

Throughout his tenure, Dr. Bowdridge has been working on selective breeding projects with sheep producers and other researchers. Katahdins have been chosen consistently in their work because they are a maternal breed which thrive in low input systems. Bowdridge says, “Katahdins have come far over the years. They have morphed into a Polypay-type sheep with hair.”

Since 2019, Bowdridge and his colleagues have experimented with an unprecedented “divergent mating strategy for FEC breeding.” At the SW Virginia Agricultural Research and Extension Center, Lee Wright has been facilitating the research program to breed ewes with low FEC to rams with low FEC. As well, they breed ewes with high FEC to rams with high FEC. Any sheep producer would cringe at this idea and think “get rid of the lambs with high FECs and send them in for chops.” Then ‘breed your best animals to your best’. While this practice works best on farm, researchers need to have a comparison in order to prove a genetic variation. So, this type of divergent mating is essential in their research. 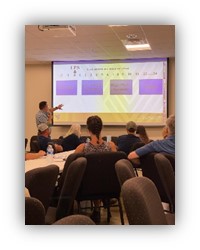 In the first year of this breeding strategy, there was a 20% diﬀerence in death loss between the lambs with high FEC EBVs and lambs with low FEC EBVs. There was a Clostridium A infection that year, which killed many lambs. The next year all lambs were vaccinated for Clostridium A and there was a 7% diﬀerence in survival between the groups. Although there was increased survival of both groups after vaccination, it was clear that the death loss remained more constant for the low FEC lambs. Research showed that when confronted with disease or unsanitary conditions, survival rate of low FEC lambs remained relatively consistent. However, the high FEC lambs’ survival fluctuated more when challenged by factors in the environment. In this way, researchers could see that the FEC EBVs also indicate general disease resistance. Therefore, selecting animals with low FEC EBVs also produces animals that have more immunity to other diseases. “In a bad year, there is a two-fold death loss in high FEC lambs,” says Bowdridge. Inevitably lambs will be challenged by diﬀerent diseases and dirty conditions at some point. Lambs with low FEC EBVs have stronger immune systems and display an increase in resistance to other diseases, as well.

Katahdins stand in a unique position because they have been gathering FEC data for decades. They evolved in the Southeast US, where parasite pressure is very high. Producers collected FECs because their operations depended on the survival of lambs in this warm, moist environment where parasites thrive year-round. Since Katahdin breeders have always focused on it, there is a large amount of data already collected in the NSIP system. This places Katahdins in the forefront of this sheep research because their data is so accurate.

This novel breeding strategy has resulted in many new studies for further research. As well, the unique collaboration of several scientists from diﬀerent land grant universities has propelled this research farther than any one person could have done alone. Through his diverse career in many states, Dr. Bowdridge has mentored and developed relationships with other researchers, who are working on diﬀerent projects using the same flock at Virginia Tech. Dr. Andrew Weaver (North Carolina State University) and Dr. Scott Greiner (Virginia Tech) share these same sheep for their own research. Each one asks their own questions and collects pertinent data for their needs. These scientists have mastered the wise use of public funds by sharing sheep and/or data to answer diﬀerent questions which confront the sheep industry.

Continuing their studies, last year, Dr Bowdridge and his team injected LPS (lipopolysaccharides) into the sheep. LPS is a large molecule made of a fat and sugars, which are bacterial toxins. LPS do not exist in humans or sheep naturally. They are found on the cell membrane of bacteria, which are looking to invade a cell. In this way some bacteria can cause illness in animals. Researchers use this same principle to mimic a bacterial infection without an actual bacterial infection, in order to collect data on the immune response of the sheep. This study had four test groups of sheep (St. Croix, Suﬀolks and two Katahdin groups (low FEC and high FEC.) Initially all the sheep had increased body temperatures from the exposure. However, Dr. Bowdridge finds that, “low FEC Katahdins and St. Croix sheep had a quicker return to normal temperature. In other words, they expressed ill behavior for shorter time.” In the end, the research showed that Katahdins respond in very diﬀerent ways dependent on their FEC EBVs. Those Katahdins with low FEC EBVs acted more like St. Croix, which had a ‘quick return to normal’. Whereas the Katahdins with high FEC EBVs performed more like Suﬀolk, which had a longer time

While the research on sheep is far ahead of other species of livestock, there are still so many unknowns. Some scientists think that FEC EBVs have a low accuracy because they are highly variable. Dr. Bowdridge asks, “What does a ‘0’ FEC mean?” A FEC taken in a hot, dry Texan summer has a very diﬀerent value, then one taken in hot, humid Georgia. The number of samples collected per animal can vary between producers, as well as possible errors. Therefore, FECs can vary a lot.

Dr. Bowdridge continues to ask questions to move their research forward. What is the marker for this immunity? Is there a gene that contributes more than others to the FEC EBV? What genes are segregating in the Katahdins? If we know some of these answers, then maybe we can create a blood test to identify which animals have that gene. In this time of increased restrictions on medications, healthy animals become even more important. Dr. Bowdridge’s research, which has correlated FEC EBVs to overall disease resistance, is a huge step in the sheep industry. We have the FEC data, which producers have already been measuring for decades.

This gives the entire sheep industry an advantage over other livestock groups who are now trying to identify their own criteria for animal health. Katahdins are in the forefront of this movement, because of the dedicated producers who have been collecting this FEC data for years.

Dr. Bowdridge continues to ask questions to propel our understanding of animal health forward. His many years working with sheep, from producer to geneticist to parasitologist to immunologist, has given him a broad perspective. This enables him to translate the scientific research in an engaging and meaningful way to sheep producers. As well, he feels supported by the passion of these producers, who want to contribute to his studies. Dr. Bowdridge says with contentment, “I have the best job in the world”. His winding path through the diﬀerent worlds of science and sheep promises greater understanding of sheep health, which will benefit us all.

The Value in the Veterinary-Client-Patient Relationship