Scale Options for On-Farm Use

A producer needs a way to weigh animals when they want to understand how well their lambs are growing, and when to take them to market. There are a variety of reasons to weigh animals, depending on what data you are collecting and what results you want to be able to achieve from it. Before we were involved in the National Sheep Improvement Program (NSIP), we just wanted to know weights between 30 & 150 pounds, as we only cared about how our lambs were growing between one and 12 months of age. We didn’t weigh newborns or adults, as we had no need for that data. And just as scales are an important part of gauging your growth progress, the proper handling equipment leading up to the scales is critical to make the whole process a success.

First, a producer should determine what they want to weigh. Obviously, the animals need weighed, and this may range from newborn lambs (3 – 15 pounds covers most operations), to adult rams up to 300 pounds. In addition to weighing animals, there are other items to be considered, such as colostrum, mineral concentrate, copper oxide wire particles, fecal samples, seeds, ration portions, hay bales and other feed stuffs. No one set of scales will satisfy all these weighing needs, so a combination of scales is needed to serve all requirements.

Once the uses of the scales are determined, then the shopping and justification of the cost begins. This is almost always an economic decision, trying to spend as little money on a set of scales as possible. I was no different as I began a search for scales to meet our needs. Some of the smaller scales are low cost and low risk to try them out, but the scales with larger capabilities will cost hundreds to thousands of dollars and take more planning to integrate them into the handling system. The smaller scales can be very handy for eliminating guesswork and are often obtainable for under $30 for a basic set of postal or kitchen platform scales. These are generally battery operated and very helpful for measuring powders and liquids. Small scales are also used for weighing lambs, though these are generally a hook-type scale, but still very low cost. A commonly sold scale for this is a battery-operated unit with a digital readout. I used these for years, though I seemed to be buying a new one every year, and they are cumbersome to use. They may turn themselves off before you are ready to weigh, and they can be on the wrong setting, or the battery starts going dead. Trying to weigh a lamb in a sling with one of these can be challenging and time consuming. Some people weigh lambs in shopping bags, buckets and a variety of other methods. I was introduced to the Rapala Mechanical Tube Scale (15-Pounds) a few years ago and it is great… and durable. There is a marker slide that stays at the weight even after the lamb is removed. It may not be as accurate as a digital scale, and there is no tare function, but it is very easy to use as long as you remember to subtract the weight of the lamb restraint.

The larger scales can be hook scales or digital platform scales. The hook scales require a crate to be supported by the scales and the animal enters into the crate and is weighed. This generally requires a specific handling crate which needs to fit into your handling system. I’ve not used this type of setup, but I think it could be tricky when animals are moving inside the crate and the needle on the scale is moving back and forth. Most digital scales eliminate this issue by having an average weight displayed after a few seconds, and some scales have a setting for shorter or longer time spans for the average weight. A versatile set of scales is a scale kit from A & A Scales online. These are around $200 and are very easy to assemble. Don’t be intimidated by the wires, as they are all “plug & play”. I’ve had a set of these mounted to 2′ x 4′ piece of ¾” plywood for many years. It has an onboard battery so it can be taken into the field. I can weigh lambs, sheep, feed, and hay with these… anything up to about 1000 pounds. We used it to weigh lambs inside of a dog crate setting of the plywood. I also set it inside our runway with a gate in front and in back and weighed lambs and adults. Do not be afraid to try these scales, as it takes little skill to get it working. When using this in a field I found that a piece of plywood under the entire platform was required.

After a few years of the scale kit and due to the growth of our flock, we decided to go to an RFID ear tag system and to use a Tru-Test scale with Bluetooth capabilities. Again, the scale is a kit, with a scale head and load bars, but I put it under a crate that I made with a front and rear gate. With the RFID and Bluetooth scale head we are able to weigh and record several animals per minute.

So, we now own more scales than I would have imagined, as there is a scale for every occasion. If you want to keep growth data, you have to know your weights. Do you need scales? No, but if you want to up your game raising sheep then you may need a few styles of them. 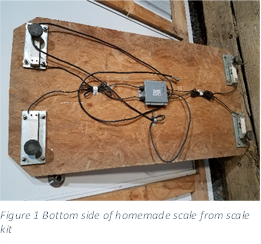 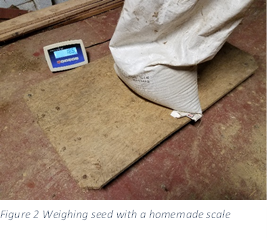 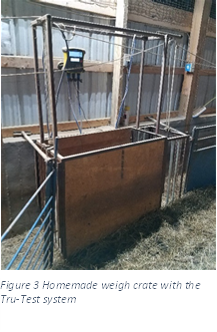 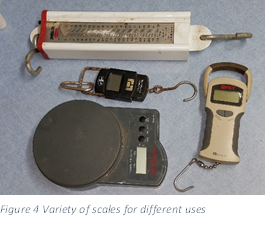