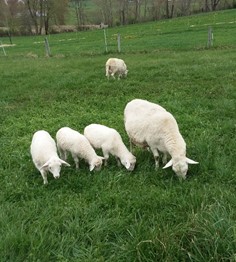 Katahdins are raised in diverse environments using a wide range of management styles and for a variety of reasons. However, there should be a few common goals in any flock. In addition to being a shedding hair breed, Katahdins have always been viewed as an easy keeping maternal breed. In recent years, many breeders have also begun selecting for parasite resistance to make the breed even more easy keeping. We know that the number one predictor of profitability in a ewe flock is the “Pounds of Lamb Weaned per Ewe Exposed.” This metric combines several maternal traits. This article will argue that regardless of the management, environment, or marketing goals of a flock, it is important that Katahdin breeders never forget to select for good maternal traits.

The August 2021, ASI magazine had an article written by Drs. Murphy, Freking, Burke and Taylor accompanied by a graph of the distribution of lambs weaned in the USDA flocks. The purpose of the graph was to illustrate that there is a lot of genetic diversity, both good and bad, in all breeds and progress can be made by selecting the best animals available in a breeding program. However, it was also obvious that Katahdins were not performing well compared to other breeds in the number of lambs weaned. While the data should not be directly compared because of different management goals for each flock in the USDA program, the graph should serve as a wakeup call to all Katahdin breeders. Within the hair breeds, Dorpers are known for their heavy muscling, but Katahdins can and should be able to outshine any other breed for documented parasite tolerance and maternal traits. However, it takes constant diligence and selection to keep making progress in those areas. Let’s look at some of the ways shepherds can unintentionally select against maternal traits.

Any management practice that makes it easier for the ewe to raise lambs, makes it harder to identify the bad ewes that need to be culled. Shepherds that pen ewes into a jug before lambing and don’t turn them out for two weeks will never be able to figure out which ewes naturally keep their litters together or run off and forget about their lambs. The jug is a great way to save a lot of lambs but makes it harder to tell the really good mothers from the really bad ones. Another issue with the current high demand for ewe lambs is the temptation to sell every ewe lamb born as “breeding stock.” Mature ewes that lamb in the last half of a 35-day lambing period might not be as fertile as ewes that lamb in the first half. Retaining breeding stock, both rams and ewes, from the first half of a breeding season is a time-honored way of selecting your most fertile animals. Likewise, keeping a ewe that did not lamb this year because you really like her is a fast way to lower the overall fertility of your flock. It might sound harsh, but the reality is a ewe that does not produce a lamb should be culled. Keeping an open ewe is a bad economic and genetic decision.

Focusing on other traits can make it harder to focus on maternal traits. This can be a conscious decision when, for example, you are paid to produce fast growing lambs so you focus on growth at the expense of other traits. Or it can be unconscious when you just don’t worry about maternal traits because you think everything is okay. In either situation, maternal traits can start slipping backwards. This is not to say that maternal traits have to be the top priority, but they should never be ignored. We also have to watch the inbreeding coefficient because animals that are inbred at a level of 8-10% or higher will start showing reduced vigor and reduced maternal traits.

Another management situation that can keep shepherds from identifying their best genetics is poor nutrition. If you have been selecting rams with high Number of Lambs Weaned (NLW) EBVs for several generations and you just can’t seem to increase your weaning percentage, the problem might not be the genetics but the nutrition or management of the ewe flock from pre-breeding through lactation. Lack of flushing before breeding, underweight or over fat ewes, rough handling while pregnant, lack of protein during late gestation and lactation, etc. are all management issues that could mask good genetic potential. This can make it harder to find your genetically superior animals. Since 80-90% of the variation between animals and flocks are environment and management, we can’t forget to focus on those factors as well. We need to provide the best possible environment so our best genetics can really shine.

There is a lot of genetic variation in the Katahdin breed and even within most flocks. Our challenge as breeders is to identify that variation as accurately as possible. That is where EBVs come into play. Maternal traits, where we measure the traits as a 0, 1, 2, or 3, are very different than fecal egg counts where the range might be 0 to 10,000. It takes multiple generations of data to help sort out the effects of genetics, environment and management. EBVs, and now GEBVs, will be most useful for maternal traits. Using DNA samples will give you the biggest benefit in increased accuracy of young animals in the maternal traits. This is because we can’t get an idea of a ewe lamb’s maternal merit until she is 3-4 years old. And we can’t measure the maternal traits of a ram until his daughters are 3-4 years old. But with genomics and multi-generational analysis we can have a more accurate estimate of an animal’s genetics before we make selection decisions.

It is not the purpose of this article to define what level of selection pressure any producer should place on maternal traits, but some guidelines might be informative. First, do you know what your lambing percentage per ewe exposed is? How about weaning percentage per ewe exposed? What percentage of your ewes lamb in the first 17 days of the lambing season? Shepherds need some basic records to track these key measurements. Second, one easy method to improve your flock is to cull the bottom 10-15% of your flock each year. Ewes that don’t breed should always be culled. Ewes that have a history of lambing twins or triplets and only raising a single should also be culled. Ewes that have twins and raise two runts should be culled. Culling the bottom is the easiest way to raise the average of your flock. Third, selecting the best ewe lambs and buying the best rams that meet your goals and priorities will keep raising your flock average in the future. There is some concern that in some extensively managed operations you might not want to select for high Number of Lambs Born (NLB) because you don’t want too many triplets. So, in that case you can use the NSIP Percentile Ranking report and select replacements that have a high Number of Lambs Weaned (NLW) EBV but limit your choices to animals that fall between the 30th-50th percentile bands for NLB. In very intensive operations, it might be desirable to select only rams with a NLB EBV that falls anywhere above the 30th percentile band. These are decisions that each shepherd needs to make based on where their flock is now and their goals and priorities moving forward. However, we should be very careful about selecting any animals with a NLB or NLW EBV that falls below the 50th percentile band. As purebred breeders, we should always try to offer animals above the 50th percentile band. The Katahdin breed has plenty of good replacement quality animals that have good maternal traits in addition to other measured and visual traits, so we don’t need to sacrifice maternal traits to get something else.

In summary, Katahdins offer several important traits to the US sheep industry. Katahdins are a shedding hair breed; many of us can offer proven parasite resistance; and historically the breed is known as a maternal, easy-keeping breed that can thrive on standing forages. However, as we grow and promote the breed to commercial sheep flocks, we need to remember what we are not. We are not a heavily muscled terminal sire breed. Katahdins fit into commercial flocks well as a maternal ewe breed that can be crossed with terminal sires to produce market animals for either the light lamb market or, with some different selection pressure, the traditional lamb market. But either way the commercial shepherd wants the most pounds of lamb weaned per ewe exposed. That metric is driven by number of lambs weaned and not by weaning weight. It is maternal traits that drive profit in the commercial lamb industry followed by low ewe maintenance cost. It is not long-legged sheep or fast-growing sheep or heavy ewes and rams. In fact, it is the opposite. Medium sized ewes that have low maintenance cost that easily raise twins and sometimes triplets will be the most profitable ewes in a flock. Dr. Charles Parker called them the Madams of a ewe flock and encouraged shepherds to identify and select for those special ewes.

The US sheep industry has to import 60-70% of all the lamb meat eaten in this country to keep up with the growing demand. The Katahdin breed is uniquely situated to help expand the US ewe flock by 2-3 times its current size. However, we will only be successful if we remember what got us to this point. Maternal traits are of primary importance.