Note: One of EAPK’s goals has been to get to know fellow members through a series of producer profiles. We are very fortunate that one of our members, Beckie Hotz, has joined the Communications Committee and agreed to take on this project. We asked Beckie if she would write the first profile on her own farm to introduce herself as well as the project. That’s never an easy task, but Beckie graciously agreed. Here is our first Producer Profile:

My introduction to agriculture was through plants. I studied biology in college with a broad view of both animals and plants. Toward the end of college, I focused on the plant side of agriculture, specifically at the soil level. All these years later, I find this helps me stay focused on the value of pasture management.

After college, I taught outdoor experiential education for youth and led group treks in the mountains. Soon after, I realized that I wanted to be more self-sufficient and learn to grow my own food. I interned on several CSA (community supported agriculture) and vegetable market farms. Most of all I enjoyed my job on a “small” diversified family farm in California. I was introduced to sheep there, where I moved them through the picked vegetable fields with portable fencing and a solar charger. I appreciated the exposure to seeing how animals fit into a farm system. In that fertile valley I learned a lot about growing food and I met a young Mexican farmer, Adan, who became my husband.

Back home on the east coast, my father, sisters and I were looking for a way to be together after my mother died suddenly. My family bought a farm in rural western New Jersey. Having land gave us all space to be together. Adan, my dad and I became the farm team and we experimented with all kinds of livestock in those first years. Sheep have been a mainstay for us since the beginning. 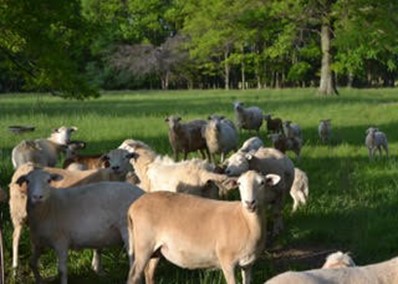 Starting out in 2003, we bought two Southdowns locally and rented a ram each fall. I liked those Southdowns for their flavor and disposition. Each spring there was a lot of sheep drama with lambing problems. Frankly, I was getting tired of shearing them and I never really got that rhythm down. Awake in the night with my own newborn baby, I was annoyed that I needed to take care of their babies too.

I was drawn to Katahdins for their thriftiness, low maintenance and of course, maternal qualities. I had climbed a snowy Mt. Katahdin as the final summit of the Appalachian Trail when I thru-hiked the trail from Georgia to Maine a few years before. So, I knew I had found the right breed just by the name alone.

I have always kept production records and selected for parasite resistance, good mothering and growth on grass. Most of my flock are fully registered Katahdins.  In addition, I have kept a Southdown maternal line from my old flock to upgrade.  There is high milk production and strong growth that I want to keep in my flock through the Southdown influence, as I work to eliminate the parasite problems and the wool coat. 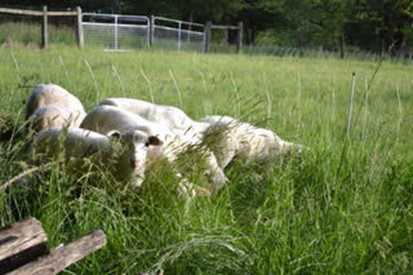 Currently I graze 35 sheep on 25 acres. I practice management intensive grazing and aim for 3-day rotations using portable electric netting. We have finally finished the perimeter fence of woven wire in the last field with a top wire to run electricity around each paddock, adding it to the rest of the grazable land. I feed little hay because I stockpile a field of fescue and they graze it into February. Then they are fed large round bales until the grass gets growing by mid-April. For the last month of gestation and the beginning 5 weeks of lactation, they get some supplementation with a sheep pellet/corn mixture.

Our lambs are born outside in March, on the south side of the barn. I jug them inside for a few days to see more closely if there are any problems. By bringing them in, I can catch issues, like mastitis, as they emerge. After a time, they join the new mothers’ group on the other side of the barn.

To keep rams growing better and to be able to evaluate them more easily in the flock, rams are kept intact. They are weaned at about 100-120 days. Ewe lambs stay with their dams and self-wean later in the summer. This keeps the girls growing stronger for that first lambing next year. No creep is fed. While the ewes get some grain those first weeks of lactation, the lambs only get some if they can sneak it well enough alongside their dam. After that, they grow on grass and are pasture finished.

I have seen improvements in our grass quality with increased rotations. We frost seeded some red clover into the front fescue field to increase nutrition there. This way we get another grazing pass through there with summer weeds, which dilute out the unpalatable fescue at that time. We are also decreasing the Japanese stilt grass through grazing and targeted mowing in early fall to prevent that annual invasive from reseeding and outcompeting other grasses.

Through the years, we have sold lamb and our organic garlic directly to customers through farmer’s markets and cooperatives. As well, we have always sold directly through custom cut orders. Recently I have been selling during ethnic holidays to save myself some time. Frankly, I am undecided on which way is best for us.

We have sold eggs from rotationally pastured chickens for years through residential drop-off sites. My 3 kids (12 yrs, 10 yrs and 7 yrs old) have been an increasing help on the farm as they grow. They are my assistants with lambing and working with the sheep throughout the year.

Breeding stock sales have been a part of our farm revenue, as well. In the past I have used my own production records and visual appraisal to decide my top producing ewes and rams. At this point I am looking forward to NSIP to increase my productivity on grass and parasite resistance in a quantifiable way.

Even though I stopped teaching outdoor education earlier in my life, I had continued to teach teenagers biology and chemistry at the high school level. Since I lived in the same town as I worked, every fall students would ask why my sheep along the highway were painted different colors. I explained about marking harnesses and as their eyes grew wide and their mouth dropped open, I knew they would remember that science lesson!