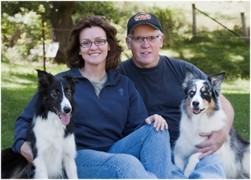 As a dairy nutritionist by training, Vince Pope knows well the science of raising sheep. However, he feels there is a lot of art in raising sheep as well. This art is just as important as science in producing strong animals, yet often takes many years to master. That education happens on the fields and in the barns, as the rhythm of each year moves forward.

Vince grew up on this land of Double Ewe Farm in the rolling hills of southern Wisconsin, which was bought by his great grandfather in 1912. Four generations in his family have farmed this land, mostly in dairy cows. Like so many areas in the U.S., the farmland was being lost to subdivisions and residential sprawl. Vince and his wife Nancy returned to his family’s farm in 2006 and bought more land contiguous with the original farm, where his father still lives at 98 years old.

Vince wanted to train border collies for competition, so Katahdins were an easy choice for flocking well and being easy care. Today they raise 60 Katahdin ewes and 20 cows. After all, “Sheep are just small dairy cows,” says Vince. Although he has found cows to be “less maintenance” than his sheep at birthing time, both complement each other on their farm.

Lambing starts the first of May each spring. The cows calve in April, so this works well. “We tried lambing earlier but the weather in Wisconsin is too unpredictable for us”. Besides May is perfect timing from a pasture standpoint in Southern Wisconsin. A donkey protects the flock from canine predators, but bobcats killed several lambs in 2020. As a result, the flock now moves to a closer field at night. The Popes even made scarecrows to hang in the trees, which so far have eliminated the bobcat kills.

According to Vince, “Grafting is something we are really good at.” At one time, Vince’s parents liked to bottle feed lambs, which was a big help in their lambing system. However, after family circumstances changed, the Popes were resourceful to find another way to do it. Since single lambs only bring in enough profit to cover the ewe’s annual maintenance expense, ewes who birth one lamb after their first year have a one-way ticket oﬀ the farm. In recent years more triplets and even some quads have been born. By evening out lamb groups, the ewes grow their lambs better and it reduces labor for them. So, they often pull a lamb from a multiple birth and graft it onto a mother who had a single or a stillborn lamb.

In Vince’s experience, grafting works when it is done right after birth, or up to 2-3 days. They slime up the grafting lamb with afterbirth from the adoptive mother, so it smells like her own. They will even tie the back legs of an older lamb, so it hobbles. In this way it helps fool a ewe into accepting her “newborn lamb,” who just learned to walk. This works about twenty percent of the time. 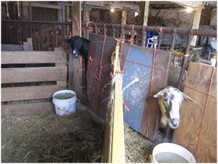 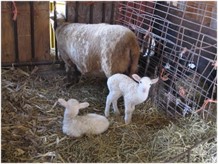 “Once you pull the lamb from the mother, you must be one hundred percent committed to making it work because you can’t go back,” states Vince. If the slime graft fails, the ewe is put immediately into the grafting stanchion, which makes for certain success. This stanchion is from their days in dairy. It has vertical bars that allow the ewe to move her head to eat or lay down. Two feet wide plywood was added to each side, so the ewe can’t see which lamb is nursing. Sometimes they even cut a burlap sack and put it on her neck, so she can’t see through her legs. Not being able to see and easily smell the lamb is key. Each day the ewe is released from the stanchion for the test of lamb acceptance. If she still rejects the lamb by butting it, the ewe immediately goes back into the stanchion another day. Vince says, “It always works in the head chute in 3-5 days.”

Through the years the Popes have gotten creative with their grafting. “If you temporarily take away the lamb that the ewe likes, sometimes she will buddy up to the alien one and accept it,” says Vince. They have even seen ewes accept a lamb better when a dog is brought into the barn. She instinctually protects the lamb and accepts it. This is all part of the art of producing sheep, believes Vince.

The mature ewes are expected to produce 2.5 lambs per year with no assistance. “This ratio means twins one year and triplets the next,” states Vince.

In NSIP, grafting lambs raises some questions in their operation. They know that it will “mess with their numbers.” It pulls down a ewe’s Hair Index because the grafted lamb is treated the same as a dead lamb in the equation. The ewe didn’t get a chance to prove her ability to raise the triplets or quads herself. Vince considers these diﬃcult decisions but feels committed to do what’s right for the animal and for themselves, even if it hurts the Hair Index on that ewe. In the end they know which ewes have been affected by the grafting issue and take that into consideration when retaining or selling livestock.

Growing up in the dairy business, Vince adheres strictly to the rules of conformation when picking good breeding stock. He is very proud of their flock with strong toplines and sound feet and legs. Secondly, growth becomes a priority because “we are all ultimately 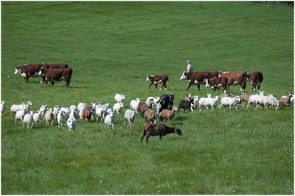 paid to produce meat and hopefully do it as efficiently as possible.” They currently market lambs to a meat store every other week once the lambs reach 110 to 115 lbs. As well, parasite resistance will keep animals healthy and growing all season. They mainly select replacements based on EBVs for Fecal Egg Counts (FEC), Post Weaning Weights (PWWT), and Maternal Milk (MWWT) in their own flock as well as when purchasing rams.

The Hair Index is not something they put a lot of emphasis on in their flock. Vince explains, “Grafting will skew that data a bit in our flock, and not give a true value to a sheep’s breeding potential. Breeding stock coming out of different production systems and management conditions with high indexes are probably not a good fit in our pasture rearing system.” At this point they believe that balanced EBVs are most important for them, so they don’t go backwards. They feel satisfied with the quality of their sheep, but work to maintain that high caliber of breeding stock for the future.

There is a lot of coordination to maintain the animals, as well as work in their other jobs oﬀ the farm. While Vince studied and worked as a nutritionist in dairy science right out of college, he now works full-time as a Vice President of Business Development for a national Autism therapy company. Nancy is a Board-Certified Veterinary Surgeon specializing in small animals (dogs and cats), and travels throughout North America for her work. She takes oﬀ the month of May to focus on lambing. They oﬀer customers the opportunity to spend time with them during lambing, hoof trimming, FAMACHA scoring, and Fecal Egg count pulls to learn how to handle sheep and the problems that can arise. As well, each summer a first-year veterinary student interns with them to learn hands-on about the sheep and cows. This year they have a neighbor girl who does chores while attending veterinary technician school. This helps them manage all the work and still maintain professional off-farm careers.

“I’m not interested in words like ‘grass-fed’ or other names,” says Vince, that are used to market animals. Vince and Nancy utilize the best of science by doing forage tests on their hay. They consider the results and feed animals according to their dietary needs and the current cost of commodities. 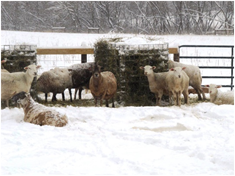 The ewes are fed only on pasture and hay with no grain supplementation, because that gives them the best nutrition for each dollar spent. “If you push the pencil, good hay right now gives you a lower cost and better-quality ration than using corn”. At flushing time and during breeding the ewes are fed high quality alfalfa to ensure a successful breeding. For the second trimester the ewes are fed lower quality, less expensive hay. Then, forty-five days before lambing, ewes start their “transition ration” onto the extremely high-quality alfalfa they get during lambing. The Popes always buy large square bales (3ft x 3ft x 8ft). Vince thinks square bales are more nutritious than round ones and are much easier to stack and store. So many leaves are lost in round baling because the bale is constantly spinning and losing leaves. Those nutritious and palatable leaves fall to the ground during the process.

Vince remarked, “Fourteen percent protein in the diet is more than enough. Feed sellers make money on protein, so they push it. Yet it just isn’t needed nutritionally when you have a decent hay as the main part of the ration. The reality is energy is typically the most limiting ingredient in the diet. So that forage test is important to determine the nutrition content of the hay you are feeding.”

Vince agrees with an old quote that, “A grazier isn’t feeding an animal, a grazier is harvesting a crop through an animal.” He focuses first on his pasture health, which in turn feeds the sheep. They compost all manure and return the compost to the pastures. Science comes in again as soil samples are taken every 5 years. He will fertilize with a custom-mixed product, if necessary, but has found that keeping a percent of the pasture in clover covers most of the fertilizer needs. Vince frost seeds red clover (about 6 lbs per acre) on twenty five percent of his pastures every year. Frost seeding works well most years, but by doing it every year “we are sort of hedging our bet.”

Vince feels very strongly that you should prevent disease rather than treat it. He adds a coccidiostat thirty days before lambing into the ewes’ mineral mix. It remains in the mineral mix until the lambs are weaned and come off pasture. In this way, the microorganisms are killed inside the ewe’s body before the lambs are even born, which eliminates the problem on the pasture before it starts. He also feels that the sheep are less susceptible to barber pole worm as a result of having stronger immune systems when no coccidia are present. The Popes surrendered an animal welfare certification when they started this preventative step in their system. Ironically the rules stated that a producer needed to prove they had a coccidiosis problem first and it only works as a preventative so waiting until you had the problem made no sense. However, Vince feels strongly that preventing illness greatly supports the welfare of the animal and that is a top priority.

Vince and Nancy Pope have studied and worked in science their whole lives. Understanding ruminant nutrition and veterinary science has shaped their sheep production, resulting in a prolific healthy flock that is easy to manage. Yet this farm’s portrait gets even more colorful, when you see the art that is incorporated into each creative solution utilized on Double Ewe Farm. Truly, it is the fusion of both the art and science of sheep production at its best.