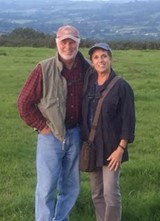 “The Man Born to Farming” is more than a poem by Wendall Berry of quaint sentiments. It speaks of a producer such as Richard Manning who has lived his life as:

“The grower of trees, the gardener, the man born to farming, whose hands reach into the ground and sprout, to him the soil is a divine drug… “

Richard grew up on a commercial cattle farm in Alabama. So, when he and his wife, Paulette, got married in 1970 and bought land to create Sweet Seasons Farm, cattle were the obvious choice. However, he was interested in training border collies for competitions, so they needed some sheep, too. Since, as Richard says, “You get more ‘training’ with sheep”, they bought some wooly ones. Those wool sheep only lasted six months on the farm, when the Mannings heard about the hardier hair sheep. In 1985 they bought seven ewes for $30 each from a local farm. Then, they purchased a Katahdin ram from a different farm, who had gotten all their stock from the original Piel farm in Maine. In his opinion, those first hair sheep were good mothers, yet not as meaty as today’s sheep. He says, “These sheep have come a long way over the years. Now they have more meat and grow 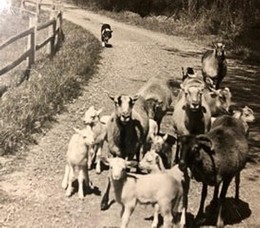 In 1992 the Mannings were “lured in by the propaganda of the Dorpers” and brought some rams home hoping to improve the growth characteristics of the lambs. After the first few generations any positive growth seemed to be lost and Richard sold all his ewes, which were Dorper-Hair sheep crosses, in one lot. He was frustrated by their lack of parasite resistance and he says, “They didn’t grow so well anymore.” He kept all the lambs that had been sired by a Katahdin ram that year. Still today all his ewes’ genetics can be traced back to those first seven hair sheep.

After years of production and pushing a pencil to compare the costs of the cattle and sheep, Richard decided that sheep were much more profitable and now he only has sheep on his farm. At this point the Mannings optimally raise 250-300 commercial ewes on their farm in Alabama, although sheep numbers can vary according to farm sales. They currently have 180 sheep because of a big sale this year.

Over 30 years, their original flock kept improving and they were very satisfied. Richard was surprised that the good got even better when they brought in some NSIP rams. He wanted to keep the good maternal traits and parasite resistance that were already present in his flock. However, he did see a remarkable improvement in meatier carcasses and increased lamb growth. He says that now he will “always buy rams backed with good performance data.” 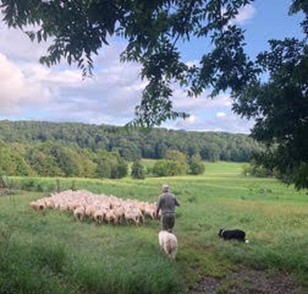 Richard retired from 36 years of service in the Farm Service Agency where he kept lots of data and helped administer the U.S. farm bills. He says, “I am tired of keeping records, but I sure am glad that other folks keep them. I ride on their coat tails.” He proudly states, “My flock has been built on laziness. I don’t want to work for my sheep. I want them to work for me. I stopped deworming my ewe flock in 1998 and I cull anything that needs hoof trimming.” In reality, he will deworm a ewe or lamb, if needed, but they never stay around for the next breeding season. He culls hard to improve his flock genetics. He joined EAPK because he believes that, “These are the people that I want to buy sheep from.”

Sheep are rotated between 15 paddocks on 110 acres. Each 8–10-acre pasture paddock is enclosed in a permanent woven wire fence. Sheep are also grazed in their forest for another 50 acres of summer grazing on low scrubs in woven wire fence. Richard says, “Electricity doesn’t keep out coyotes anyway and I hated to get shocked by the electricity.” Generally, sheep graze 3-4 days in a paddock. In his opinion, “You must have dogs.” and there are at least five livestock guardian dogs with the flock around the farm. Though he still works his sheep with border collies, Richard sees the LGDs as being even more important because of the high coyote pressure in the area.

Some years the sheep are selectively fed some corn. However, he says that, “This year was exceptionally good for growing grass.” and the sheep grew well exclusively on pasture. He is flexible to feed differently depending on the conditions that year. 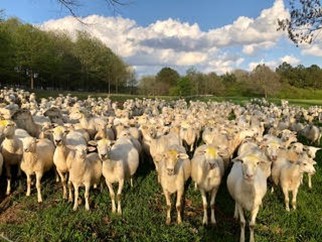 January and February are lambing time on pasture for the Mannings. For 25 years there was no sheep shelter on the farm. However recently they use a 40ft x 400ft old chicken barn to feed round bales of hay. Still, lambing happens in the field. Richard says, “This works so well because we have been raising these sheep so many years.” Richard believes that his most important tool is ‘hard culling’ to develop hardy and productive sheep.

His perfect ewe has a strong maternal instinct with twin lambs. As well, they have to thrive in the hot southern climate, where parasite loads can be high. Traditionally ewe lambs self-wean if they will stay on the farm, which helps promote their growth. When lambs are sold, they are usually weaned at 90-120 days. They are sold as breeding stock or feeder lambs. This year with so much great grass and clover, Richard grew the ram lambs to 110-120 lbs in nine months for a buyer of finished lamb.

Over the years Richard has worked to improve the pasture which he feels is key to success. By September 1st, winter ryegrass is sown and ready to graze by late October. He includes some chicory and white clover because of their high nutrition content. Frustrated by fescue with high endophytes, he overseeds to outcompete it.

Did you know that sheep love acorns? Richard believes that his sheep grow really well eating them, as well, the high tannins help combat parasites. Thinking of the future he is planting 50 new oak trees this year. Most oak trees take many years to start producing acorns, but a special Asian variety begins producing in only five years.

For years, Paulette and Richard have hosted weddings at their picturesque farm. Their farm side business as a wedding venue was one of the first of its kind. Their white Katahdins grazing in the green pastures have been the backdrop for many bridal photos. 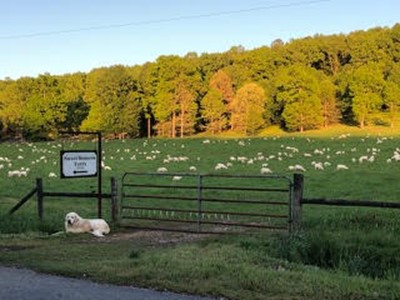 Traditionally the farm sold lambs to the ethnic market through a broker who picked up animals on the farm. Recently they have also started selling to another farm, who then sells to Whole Foods stores. This year they made an unconventional move and sold all their mature ewes to a large Dorper breeder who wanted new genetics to increase hybrid vigor. Always looking at new possibilities, Richard will be partnering with a neighbor in the future to expand their production to 600 ewes and perpetuate the legacy of quality sheep that the Mannings have created on their farm.

Years ago, Richard was challenged by “finding decent markets for hair sheep.” Today, as a self-proclaimed “lazy” sheep farmer, he has become a trusted source of quality sheep and helped to develop the Katahdin breed. After 36 years growing sheep and a lifetime in agriculture, this veteran producer truly encompasses “The Man Born to Farming.”