Katahdin producers who use NSIP estimated breeding values (EBV) to make selection decisions on replacements for the home flock or for sale often select for more than one trait at a time. In fact, most breeders search for the perfect animal with balanced EBVs, or those that excel in all traits of interest. But what happens when two or more traits are used in selection? Can forward progress be made on both traits? Maybe.

Parasite resistance has been selected for in several flocks with an estimated heritability of 0.19 for weaning fecal egg count (WFEC), and 0.24 for post-weaning fecal egg count (PFEC). These two traits are highly correlated (0.82; Notter et al., 2018). While NSIP does not currently provide an EBV for peri-parturient rise (PPR) in FEC [fecal samples collected from the dams between 0 (PPR0) and 30 (PPR30) days post-lambing], PPR is relatively highly correlated genetically with WFEC (between 0.56 and 0.77 for genetic correlations) and PFEC (0.56 to 0.73) of lambs, and correlation of the two time points for PPR is 0.96. Those relationships are what we would anticipate. The PPR data was based on up to 1,230 lambings by 750 ewes in 10 flocks. The correlations between FEC for a lamb and the PPR for the same animal as a breeding ewe suggest that genetic improvement in parasite resistance in the dam is possible.

In the revised NSIP parameter values (October 2021), WFEC has a small negative genetic correlation with WWT and PWWT, which is favorable. It implies that lambs with heavier weights at weaning also were more resistant to parasites. PFEC remained uncorrelated with WWT and PWWT, consistent with findings by Ngere et al. (2018). However, there are moderate positive correlations between WFEC with both NLB and NLW, and low positive correlations between PFEC with NLB and NLW. Lambs with higher genetic potential for fecundity appear to be somewhat less resistant to parasites. However, both NLW and NLB are moderately positively correlated with WWT and PWWT, further complicating the relationships among this set of traits. This is the reason it becomes difficult to pinpoint the explicit effects of our new parameter estimates on an individual animal’s EBV for an individual trait. Still, this full set of relationships would be reflected in the EBVs that ultimately are combined to calculate the US Hair Index. Correlations of WFEC and PFEC with the Hair Index have not been examined to date. Also, selection for body weight (i.e., for big sheep) will not affect PPR0, but sheep with high EBV for PWWT (i.e., large more late-maturing sheep) may be somewhat more vulnerable to the PPR30 under the stress of lactation, which is undesirable.

Heritability for prolificacy is relatively low, but environment (such as nutrition and stress) can have profound effects on reproductive traits. Selecting only for NLB or NLW could lead to problems with lactation for larger litter sizes or faster growing lambs (Snowder, 2008), whereas dams may not produce enough milk to support the litter, particularly in extensively managed flocks. Even though negative correlations exist between selection for prolificacy and parasite resistance, simultaneous selection for multiple traits may be possible. Combining performance records with genomics could possibly reduce the lag when selecting for multiple traits (Santos et al., 2017).

The “tensions” among the traits, especially between maternal performance (NLB, NLW, MWWT and ewe body size) and parasite resistance are too low to anticipate that selection for any of the traits will inevitably produce large declines in EBVs for the correlated traits. The presence of some small-to-modest 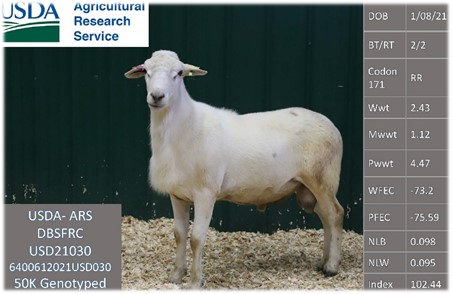 undesirable correlations among the performance/parasite resistance traits suggests that simultaneous attention to all traits in this complex will be required in order to prioritize achieving balanced improvement in the whole set of traits. Bigger sheep may be more vulnerable to parasites, especially PPR. It also seems clear that ewes that devote more resources to reproduction and milk production are more vulnerable to parasites as both lambs and ewes (an effect of metabolic and immune function along with genetics). However, the undesirable genetic correlations are small and manageable. They will slow genetic progress in any one trait but still allow genetic improvement across the full suite of traits, which is generally what we want.

The study was supported by USDA NIFA OREI Grant No 2016-51300-25723. Mention of trade names or commercial products in this article is solely for the purpose of providing specific information and does not imply recommendation or endorsement by the U.S. Department of Agriculture.

Figure: NSIP genetic trends for USDA-ARS Booneville and USA HAIR 64-0 Katahdin reported in July 2015 (2004 – 2011) and September 2022 (2012 – 2022). The dashed vertical line represents the division between the two reports and the time point in which USDA-ARS Booneville began using EBV as selection criteria (use of FEC and anemia data was used before 2012). Selection criteria after 2011 prioritized FEC EBV and MWWT with an eye on the USA Hair Index. Between 2018 and 2022 NLW became a priority. In 2021, more susceptible sires were added to enable the research location to conduct parasitology studies with higher FEC in offspring. 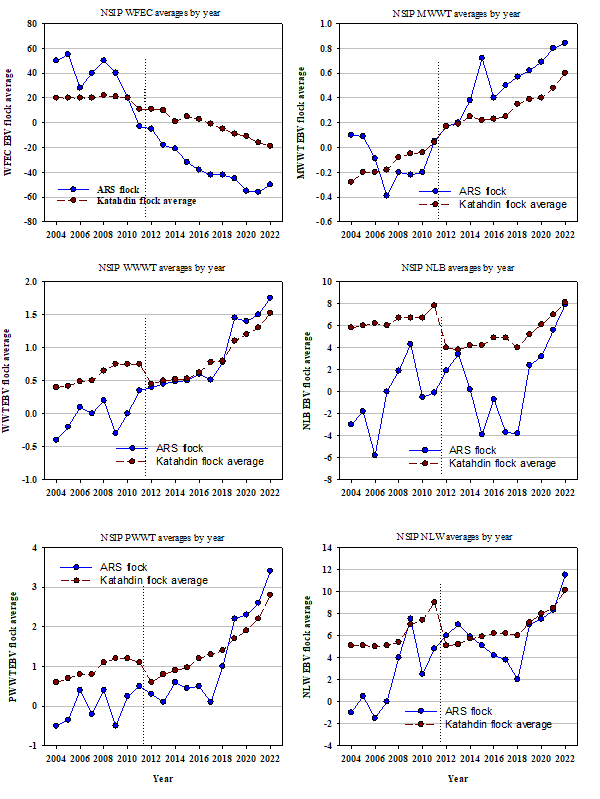 The Value in the Veterinary-Client-Patient Relationship