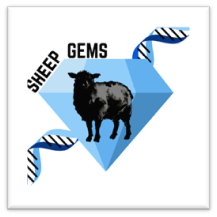 Sheep GEMS is roaring ahead, with the strong commitment by Katahdin breeders particularly welcomed. With the help of John Bare, Michelle Canfield, Tom Hodgman, and Jim Morgan—members of a Project Advisory Group—twenty-six Katahdin flocks have voiced their interest to participate in this project.

A key element of Sheep GEMS is collecting performance records in NSIP-member flocks that reflect the productive efficiency, robustness, and climatic resilience of their sheep. These include udder health, lamb survival, ewe longevity, and parasite resistance. Based on the outcome of a pilot study underway, we also are developing a measure of coat shedding in Katahdins that we plan to introduce in the upcoming year.

To date, eleven Katahdin Innovation Flocks have submitted records. On very good intelligence, at least six more flocks are preparing to do so. For those flocks yet to begin that process, please do not hesitate to be in contact with me (rlewis5@unl.edu). As a heads-up, to join in Sheep GEMS, records around breeding—specifically ewe body weights and condition scores—will need to have been collected this fall.

As noted earlier, one fitness-related trait being evaluated in Sheep GEMS is parasite resistance. That entails collecting fecal egg counts (FEC) and FAMACHA© scores. That effort is only justified in the presence of a sufficient parasite challenge. With the help of Dr Joan Burke (USDA ARS Dale Bumpers Small Farms Research Center), we are asking participating flocks to collect and submit pooled fecal samples on their ewes around lambing, and on their lambs and ewes separately at weaning. Dr Burke’s team is then measuring the FEC of the pooled sample. If high enough, we are then asking producers to collect both FEC and FAMACHA© scores on individual lambs near weaning, and FAMACHA© scores on individual ewes near lambing and weaning.

The idea behind this strategy is to save Innovation Flocks extra work and cost. However, there is a huge subsidiary benefit. If participating flocks routinely submit samples at these strategic times—at around lambing and weaning where parasitism can substantially impact animal performance and wellbeing— we can establish a strong picture of the extent of the parasite challenge in key breeds across the US. Furthermore, if the pooled sample is based on rectally collected fecal samples, Dr Burke’s team is culturing the sample to determine the gastrointestinal nematode genera present. Although the barber pole worm (Haemonchus contortus) is considered the predominant genera of nematode in the US, this allows us to test that presumption.

Genotypes on about 5,000 animals were collected as an outcome of a previous USDA grant led by Dr Burke. Those genotypes were used as the foundation to develop and release genomically-enhanced estimated breeding values, or GEBV, in Katahdin sheep in October 2021. That was a first for the US sheep industry. Since then, partly supported by Sheep GEMS, over 3,000 additional genotypes have been collected by Katahdin breeders improving the accuracy of GEBV even more.

Although perhaps less widely advertised, those same genotypes have been used to develop protocols to reliably determine genotypes for five genetic conditions:

In collaboration with Drs Brad Freking and Mike Heaton (USDA ARS Meat Animal Research Center), the genotype results provided by Neogen were validated for all five of these genetic conditions. This was done with a ‘blind-study.’ Without their prior knowledge, DNA samples on animals with these known conditions were submitted and genotyped by Neogen. The results aligned perfectly.

What is next? With the help of Rusty Burgett, we are compiling a list of the producers that submitted the DNA sample on each animal. Once complete, these producers will be sent the genotypes for these five genetic conditions on their animals. An information sheet interpreting these results also will be provided.

Lastly, starting in August, two doctoral students—Hilal Yazar Gunes and Artur Oliveira Rocha—joined the Sheep GEMS scientific team. Hilal is at the University of Nebraska-Lincoln and Artur is at Purdue University. Even though they are recent additions, both already are making substantial contributions to the project. Artur is investigating strategies to cost-effectively collect and use genotypes to obtain GEBV. Hilal is assisting in collating data submitted by Innovation Flocks and investigating novel ways to use FEC to assess parasite resistance and resilience. It is also a pleasure to introduce Carrie Wilson as part of our scientific team. Earlier this year, Carrie joined Dr Bret Taylor and his group as a Research Geneticist at the USDA ARS US Sheep Experiment Station. You may already be familiar with Carrie from her previous position at the USDA ARS National Animal Germplasm Program.

Sheep GEMS grand aim is to holistically evaluate a broad range of factors affecting sheep systems. As hopefully is in evidence from this update, we are making good progress in that direction. Still, our success depends on the continued involvement by sheep breeders. Speaking for the scientific team, we certainly appreciate all that you do.

With best wishes for the holiday season.

Acknowledgements. This project is supported by the Agriculture and Food Research Initiative Grant number 2022-67015-36073 from the USDA National Institute of Food and Agriculture (NIFA), Animal Breeding and Functional Annotation of Genomes program, A1201. It also benefits from the previous USDA NIFA Organic Agriculture Research and Extension Initiative grant no. 2016-51300-25723.

How Does Selection for Parasite Resistance in Katahdin Sheep Affect Other Important Traits?

Scale Options for On-Farm Use